Students can refer to the Numerical Problems prepared for Chapter Light in Class 10 ICSE. These notes will be really helpful for the students giving the Physics exam in ICSE Class 10. Our teachers have prepared these concept notes based on the latest ICSE syllabus and ICSE books issued for the current academic year. Please refer to Chapter wise notes for ICSE Class 10 Physics provided on our website.

➢ Factors affecting lateral displacement of light passing through a rectangular glass block :
(i) The thickness of glass block.
(ii) The angle of incidence.
(iii) The refractive index of the glass and therefore, the wavelength of light used.

➢ Refraction of light through a glass prism

(b) Bending of stick under water

➢ Critical angle is the angle of incidence in the denser medium for which angle of refraction in the rarer medium is 90°.

When a ray of light travels from a denser to a rarer medium, with an angle of incidence greater than critical angle, then no refraction takes place and the entire light is reflected back in the denser medium. This is known as total internal reflection.

Essential conditions for total internal reflection to take place :
(i) Light must travel from a denser to a rarer medium.
(ii) The angle of incidence should be greater than the critical angle for the given pair of medium.

Refraction Through a Lens

➢ A lens is a transparent refracting medium bounded by two surfaces, both of which are either spherical in shape or one is curved and other is spherical. A lens can be regarded as being made up a set of prisms. (A lens is not made up of prisms.)
➢ There are mainly two types of lenses :
(I) Convex or converging lens.
(ii) Concave or diverging lens.
➢ Convex or converging lenses are thin at the edges and thick at the middle.
➢ Concave or diverging lenses are thick at the edges and thin at the middle.
➢ The principal axis of a lens is the line joining the centers of the two spheres of the two surfaces of which lens is a part of.
➢ Optical center of a thin lens is the point on the principal axis of the lens through which a ray of light passes undeviated.
➢ For a convex lens, the first focal point is a point F1 on the principal axis of the lens such that the rays of light coming from it, after refraction through the lens, become parallel to the principal axis of the lens.

➢ For a convex lens, the second focal point is a point F2 on the principal axis of the lens such that the rays of light incident parallel to the principal axis, after refraction from the lens, pass through it.

➢ A concave lens always produces a virtual, erect and diminished image of a real object.
➢ The power of a lens is the reciprocal of its focal length measured in metre. It is measured in units of dioptre (D).
➢ A convex lens of small focal length may be used as a simple magnifying glass or a reading lens. For this, the object is kept between the optical centre and the focus of the lens, when it is used in this manner, it is also known as a simple microscope.
➢ The magnification produced by a lens is the ratio of a size of the image produced by it to the size of the object.
➢ Refraction of an oblique parallel beam by a convex lens :

➢Refraction of an oblique parallel beam by a convex lens :

Distinction between a real and virtual image:

Relative positions of the object and image in a convex lens :

Relative positions of object and image in a concave lens :

Ray diagram for location of image in magnifying glass :

➢ Focal Length of Lens : The distance between focus and optical centre of the lens is called focal length of a lens.
➢ Focal Plane : The plane passing through the focus and perpendicular to the principal axis is called Focal plane.
➢ Aperture : The effective diameter of the circular outline of a spherical lens is called its aperture.
➢ Centre of curvature of a surface of a lens is the centre of the sphere of which lens is a part. A lens having two spherical surfaces has two centres of curvatures.
➢ Radius of curvature is the distance between the optical centre and centre of curvature.
➢ Sign Conventions :
• All distances are measured from the optical centre of the lens.
• Distances measured in the direction of the incident ray are taken as positive and opposite to the direction of the incident ray are taken as negative.
• Distances measured upwards and perpendicular to principal axis are taken as positive, whereas distances measured downwards are taken as negative.

Where, u = object distance ( always negative)
v = image distance ( can be positive or negative)
f = focal length ( positive the for convex lens and negative for the concave lens)
➢ Lenses are used in eye defect correction, magnifying glass, telescope, camera.

Revision Notes
➢The phenomenon of splitting of white light by a prism into its constituent colours is known as dispersion.
➢The band of colours seen, on passing white light through a prism is called the spectrum.
Cause of dispersion :
➢The cause of dispersion is the change in speed of light with wavelength. When white light enters the first surface of a prism, light of different colours due to their different speeds in the ➢glass gets deviated toward the base of prism through different angles.

➢ Dispersion by a prism :

➢ The angle of deviation depends upon,
(i) angle of incidence at first surface
(ii) angle of prism
(iii) refractive index of the material.
➢ Wavelengths and frequencies of different colours in white light :

Properties Common to all Electromagnetic Spectrum :
(i) The electromagnetic waves of the entire wavelength range do not require any material medium for their propagation.
(ii) They all travel with the same speed in a vacuum which is the same as the speed of light in vacuum i.e., 3 × 108 m/s.
(iii) They exhibit the properties of reflection and refraction.
(iv) These waves are not deflected by the electric and magnetic fields.
(v) These waves are transverse waves.
➢ Properties and uses of the electromagnetic spectrum :
➢ γ-rays
These rays are the most energetic electromagnetic waves of wavelength less than 0.01 nm.

➢X-rays
X-rays discovered by German physicist W Roentgen, having a range of wavelength from 0.01 nm to 10 nm.
They are produced when highly energetic cathode rays are stopped by a heavy metal target of high melting point.

Properties of X-rays are as follows :
(i) They have high penetrating power.
(ii) They strongly affect the photographic plate.
(iii) They cause fluorescence in certain material such as zinc sulphide, etc.

Uses of X-ray are as follows :
(i) In surgery for the detection of fracture, foreign bodies like bullets, stone in a human body, etc.
(ii) For detecting faults, cracks, flaws and holes in the final product of metals.
(iii) For curing untrackable skin diseases and malignant growths.
(iv) For investigation of the structure of crystals, arrangement of atoms, etc.

➢ Ultraviolet Radiation
It was discovered by Ritter in 1801. They are produced by some special lamps and very hot bodies. Ultraviolet rays coming from the sun are absorbed by the ozone layer in the earth‘s atmosphere. The wavelength range varies from 10 nm to 400 nm.

Properties of ultraviolet radiation are as follows :
(i) They can pass through quartz but absorbed by glass.
(ii) They obey the laws of reflection and refraction.
(iii) These radiations travel in a straight line with a speed of 3 × 108 m/s in air (or vacuum).
(iv) They can be scattered by dust particles in the atmosphere
(v) They cause health hazards like skin cancer, if our body is exposed for a long period.

Uses of ultraviolet radiation are as follows :
(I) For sterilizing purposes.
(ii) For detecting the purity of gold, eggs, ghee, etc.
(iii) For producing vitamin D in food of plants and animals.

➢ Visible Light
It is the narrow region of the electromagnetic spectrum which can be detected by the human eyes. Its wavelength ranges from 390 nm to 700 nm.

Property of visible light is as follows :
The visible light emitted or reflected from the object around us provides the information surrounding us.

Uses of visible light are as follows :
It is used in photography, photosynthesis and to see objects around us.

➢Infrared Radiation
It was discovered by Herschel. They are sometimes called heat wave, because their absorption causes the heating effect in the bodies and surroundings. They are produced by hot bodies and molecules. Its range is from 700 nm to 1 mm.

Properties of infrared radiation are as follows :
(I) They do not affect ordinary photographic film.
(ii) They obey the laws of reflection and refraction.
(iii) They are absorbed by the glass but are not absorbed by rock salt.
(iv) They are detected by their heating property.
(v) They are less scattered by the atmosphere.

➢ Microwaves
Microwaves are the electromagnetic wave of the wavelength having a range of 10-3 m to 0.3 m.
They are produced by special vacuum tubes.

4) When a ray after refraction, retraces its path then:
a𝜇b = 1 / b𝜇a
(where ‘a’ is the rarer medium and ‘b’ is the denser medium)

5) In case of refraction through optical slabs:
i) Incident ray is parallel to emergent ray.
ii) Angle of incidence is equal to angle of emergence.

7) In case of refraction through prism:
Angle of incidence + Angle of emergence = Angle of prism + Angle of deviation
∠i + ∠e = ∠A + ∠D or ∠δ

9) The magnification of lens is:
Size of image =

10) For simple microscope:
Magnification = 1 + D/f
(where ‘D’ is the least distance of distant vision and ‘f’ is focal length of convex lens)

12) Power of Lens: The power of lens is the measure of convergence or divergence produced by it.

REFRACTIVE INDEX OF SOME COMMON SUBSTANCES

1) The angle of incidence in air for a ray of light is 450. If ray travels through water of refractive index 4/3, find angle of refraction.

3) A glass block 2.4 cm thick is placed over a stamp. Calculate the heights through which image of stamp is raised. Refractive index of glass is 1.5.

4) A coin placed under a glass appears raised by 12 mm. If refractive index of glass is 1.5, calculate the actual thickness of glass slab.

5) A rectangular tank 6 metre deep is full of water. By how much the bottom appears to be raised, given refraction index of water = 𝟒/𝟑 ?

8) A glass slab 2.5 cm thick is placed over a coin. If the refractive index of glass is 3/2, find the height through which coin is raised.
Ans.

11) A 5 cm tall object is placed on the principal axis of diverging lens of focal length 15 cm and at a distance of 10 cm from it. Find the nature, position and size of image.

12) An object 6 cm high is placed at a distance of 18 cm from a convex lens of focal length 6 cm. Find by scale diagram:
(i) The Nature of Image
(ii) Position of Image
(iii) Size of Image

Ans. Let C1, C2 and C3 be the velocities of light in air, water and glass respectively. Then by definition:

14) What is the refractive index of an opaque body?
Ans. Infinity because the speed of light for an opaque medium is O.

25) A ray of light passes through a right angled prism as shown in the figure. State the angles of incidence at the faces AC and BC.

27) Wavelength and frequency are given. Fill up the name of the wave.

We hope you liked Light ICSE Class 10 Physics Notes and solutions. If you have any questions please post them in the comments section below 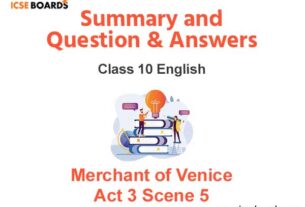 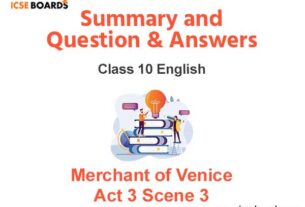 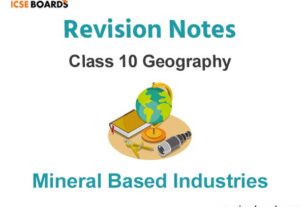