Nine Gold medals summary is one of the best materials that students can get, as it will help them to concentrate better and reduce the level of stress that students face during the furious year.

Short Summaries are essential for conceptual understanding and scoring good marks, and for Revision, Summaries are always considered the best when your exams are coming. We give ICSE Class 10 English Summary of Nine Gold Medals in a straightforward, free downloadable PDF design for the students to figure out a better understanding of the chapters.

Students should refer to the summary provided below for Nine Gold Medals, this is an important chapter in ICSE Class 10 English book. You can refer to all Treasure Trove Poem Summary provided on our website. These have been prepared based on the latest books and syllabus issued by ICSE.

The Poem:
Only winning medals is not the sole purpose of sports. Sportsman spirit, compassion, sharing, competition and complementing are also very important. A real sportsman is the combination of all these qualities. In this poem Nine Gold Medals, David Roth has presented the idea of empathy and how human values are as important as the spirit of competition. In the poem, the contestants of a race leave aside their desire to win the medal to help a smaller and weaker contestant. They all go together to the finishing line. They have empathy – the ability to put oneself in another’s shoes. Gold medals were awarded to all the nine contestants and thus the authorities also honoured their display of empathy, sportsman spirit, helpful nature and human values.

The Poet:
David Roth, born on October 10, 1954 is an American rock vocalist, song writer, actor, author and former radio personality. He moved to California while he was a teenager. His passion for music was visible since childhood. He is best known as the lead singer of California based hard rock band: Van Halen.

In addition to performing at music festivals, clubs and venues across the US and Canada David leads singing, song writing and performance workshops. He has been the artist in residence for several years at New York’s Omega Institute leading adult education centres and recorded six albums of his works.

The Poem in Detail:
Stanza – 1, Stanza – 2 and Stanza – 3
Several athletes came from all over the country to win gold, silver and bronze medals. They were coming here to participate after weeks and months of training. The spectators in large numbers were present to cheer the contestants. Excitement grew high as the final event of the day was approaching. The blocks were all lined up on the racing ground. Nine determined athletes took position at the starting blocks and were ready for the signal for the race.

Stanza 4 and 5
The contestants began to run as soon as the pistol was fired. One of them – the smallest stumbled, lost his balance and fell on the track.
The athlete who fell cried out in sheer disappointment. He felt as if all his dreams and efforts of winning the race were broken and ruined.

Stanza 6 and 7
The running eight runners on seeing him fall, instead of continuing the race, stopped and turned back to help him. All of them had trained hard to contest and win the race but each of them stopped to help bring the young boy to his feet.

All the nine athletes joined hands and walked to finishing line together. The banner above read ‘Special Olympics’ was quite appropriate as the players’ behaviour was unique, making the event unique.

Stanza 8
The race ended with nine winners. Each of them was given a gold medal, as they had walked together to the finishing line. The audience was so touched by such behaviour that they gave them the standing ovation. The ‘Special Olympics’ turned out to be really special.

Literary Devices
The poem has eight stanzas, four lines each and there is no rhyming scheme but its rhythm heightens its effect.

Alliteration:
e.g. i) But the smallest among them, he stumbled and staggered.

Narration technique:
It is much more like a story. The poet is the narrator who gives us an account of a race organised in ‘Special Olympics’. The poem brings out the ideas of compassion, sportsman spirit and teamwork because of these ideas the Olympics in the poem become the Special Olympics.

Word meanings:
Athlete – persons who are trained in sports, games or exercises that require physical skill and strength.
Resolved – determined
Block – the two starting blocks because runners push their feet against at the beginning of the race.
Poised – ready
Stumbled – hit his foot against something while walking or running
Staggered – lost balance
Asphalt – black tarred road
Anguished – grief or pain
Dashed – ruined
Beaming – reflecting happiness

Assignments
Q1) Read the extract given below answer the questions that follow –
The athletes had come from all over the country.
To run for the gold, for the silver and bronze.
Many the weeks and the months of their training.
And all come down to these games.
The spectators gathered around the old field.
For cheering on all the young women and men.
The final event of the day was approaching.
Excitement grew high to begin.

3. Give the meaning of – ‘excitement grew high to begin’
A3. The spectators were highly excited as the event approached and the race started.

4. What event is being referred to?
A4. The event referred to is the Special Olympics, in which the contestants have some problems in a part of the body.

Q2) Read the extract given below and answer the questions that follow:
The blocks were all lined up for those who would use them
The hundred-yard dash was the race to be run
There were nine resolved athletes in back of the starting line
Poised for the sound of the gun
The signal was given, the pistol exploded
And so did the runners all charging ahead
But the smallest among them, he stumbled and staggered
And fell to the asphalt instead

2. Show how the suspense was built up before the competition began.
A2. As it was the final event, the excitement was building up. The spectators were shouting to cheer up the competitors. The contestants were excitedly waiting for the pistol to be exploded and for the race to start. The atmosphere was such that naturally the suspense was building up.

5. What happened after he fell? Did the rest of the runners go on running?
A5. When he fell, the runners looked back. No, they did not continue their race. They stopped to help the runner who had fallen and pulling him up again continued the race taking him with them.

Q3) Read the extract given below and answer the questions that follow:
He gave out a cry in frustration and anguish
His dreams and efforts all dashed in the dirt
But as sure as I am standing here telling this story
The same goes for what next occurred
The eight other runners pulled up on their heels
The ones who had trained for so long to compete
One by one they all turned round and went back to help him
And brought the young boy to his feet

3. State in your words what the other eight runners did. What did their action reflect on their attitude?
A3. The other eight runners, when they saw the ninth runner fall, stopped and one by one they turned to the fallen runner. They helped him to stand up and walked towards the finishing point along with the ninth runner who had fallen. This action of those eight players shows their empathy, attitude of co-operation, unselfishness and above all, the real sportsman spirit and humanity.

5. Give the meaning of frustration and anguish.
A5. Frustration means the feeling of extreme helplessness and anguish means extreme suffering and pain.

Q4) Read the extract given below and answer the questions that follow:
Then all the nine athletes joined hands and continued
The hundred-yard dash now reduced to a walk
And banner above them said “Special Olympics”
Could not have been more on the mark
That’s how the race ended, with nine gold medals
For they came to the finish line holding hands still
And the standing ovation and nine beaming faces
Said more than these words ever will

3. The significance of the above lines is that the Olympics was named Special Olympics and it became more special because of the incident of a runner’s fall and the other runners’ sacrifice of their own desires to win the contest and helping their fellow runner. That’s why the poet has said the banner saying ‘Special Olympics’ could not have been more on the mark.
How did the race end: in what way was the ending appropriate?
A3. The race ended with nine gold medals awarded to nine participants. The ending was appropriate as the authorities also honoured their display of empathy and human values by awarding each participant a gold medal.

5. This phrase in the next line “nine beaming faces” also reflects their mood.
The spectators were also very happy and excited. They gave standing ovation showing their feelings.
Why is this race conducted every two years? Who conducts it?
A5. The hundred-yard race is an event organised by Special Olympics. Special Olympics is the world’s largest sports organisation for people with disabilities. This organisation helps people to build self-confidence and social skills. These games are conducted every two years and children and adults with intellectual disabilities are provided year-round training. As a global movement, it aims at making this world a better, healthier and happier place.

The Nine Gold Medals summary given here is ready by our Experts teachers at icseboards as per the most recent ICSE Class 10 Syllabus and CISCE rules. This Summary of the Poem Nine Gold Medals will assist students with saving a ton of time during their exams.

Nine Gold Medals Summary PDF by icseboards are up to this point the best and most study material for ICSE Class 10 English.

Summary of Nine Gold medals will most likely increment your certainty and lessen the tension of assessment. Students can download the FREE PDF of class 10 English Nine Gold Medals Summary PDF and use it to clear the entirety of their questions and inquiries and henceforth, excel in their exams 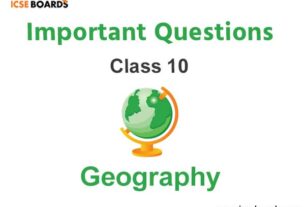 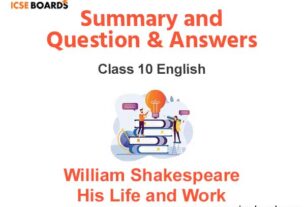 William Shakespeare His Life and Work 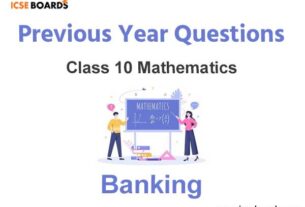