Students should read the Factors of Production ICSE Economics Class 10 notes provided below. These revision notes have been prepared based on the latest ICSE Economics Books for Class 10 issued for the current academic year. Our teachers have designed thee notes for the students are able to understand all topics given in Economics in standard 10 and get good marks in exams

Students can refer to the quick revision notes prepared for Chapter Economics Factors of Production in Class 10 ICSE. These notes will be really helpful for the students giving the Economics exam in ICSE Class 10. Our teachers have prepared these concept notes based on the latest ICSE syllabus and ICSE books issued for the current academic year. Please refer to Chapter wise notes for ICSE Class 10 Economics provided on our website.

The productive mechanism is the mechanism or system which determines the production of various goods and services in an economy. Production is the process of creating various goods and services which are consumed by the people of a country. It is a process in which some materials are transformed from one form to another. Things used in the production process are called inputs or factors of production and the things obtained from the process are called outputs. Production also means the creation of utility as shown below.

Utility is the want-satisfying power of a commodity. It is one way of creating utility by changing the form of a commodity. For example, a carpenter uses the wood to make a chair. The wood has utility for a carpenter, but it does not have utility for the final consumer. The consumer wants the chair. Hence, the carpenter creates utility when he makes a chair out of wood.

Utility may also be created by changing the location of a commodity. A commodity in Chennai does not have utility for a consumer in Delhi. This commodity will have utility only when it is transported from Chennai to Delhi. Hence, utility is created by transporting a commodity from one place to another.

Utility may be created by performing services such as services of doctors, teachers, lawyers and chartered accountants. Hence, these services rendered by individuals should be considered creating utility.

Utility can also be created by storing surplus goods at one particular time period and supplied at another time period when they are scarce. The Food Corporation of India (FCI) creates time utility by creating a buffer stock of food grains in the harvesting season and supplies the same at a reasonable price in the lean season.

Meaning of Factors of Production

Land is defined so as to include not only the surface of the Earth but also all the other gifts of nature.

Labour consists of all human efforts of the body or mind which are undertaken in the expectation of reward.

Capital is known as the produced means of production. First, it is created by man and is not a gift of nature. Second, it is a means of production and used as an input in producing other goods. Such type of goods is not directly consumed.

An entrepreneur is a person who carries the risk of business and coordinates the activities of all the other factors of production.

Qualities of an Entrepreneur

Role of an Entrepreneur in Economic Development 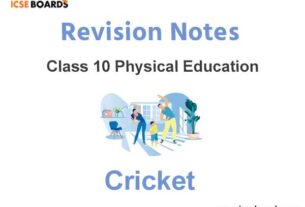 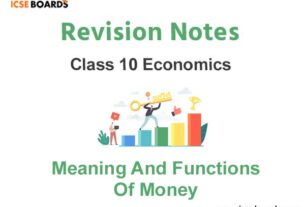 Notes For ICSE Class 10 Economics Meaning and Functions of Money