Students can refer to the Numerical Problems prepared for Chapter Modern Physics in Class 10 ICSE. These notes will be really helpful for the students giving the Physics exam in ICSE Class 10. Our teachers have prepared these concept notes based on the latest ICSE syllabus and ICSE books issued for the current academic year. Please refer to Chapter wise notes for ICSE Class 10 Physics provided on our website.

Revision Notes
➢ Atomic number : The atomic number (Z) of an atom is the number of protons in its nucleus (which is the same as the number of electrons in a neutral atom).
➢ Mass number : The mass number (A) of an atom is the total number of nucleons (i.e., number of protons and neutrons combined) in its nucleus.
➢ Isotopes : The atoms belonging to the same element, having same atomic number Z, but different mass number A, are called isotopes.
Examples include : 11H, 21H and 31H which are the three isotopes of hydrogen.
➢ Isotones : The atoms having a different number of protons but same number of neutrons, i.e., different Z and A, but same A – Z, are called isotones. They have a different number of electrons.
Examples of isotones include : 2311Na and 2412Mg.
➢ Isobars : The atoms of different elements which have the same mass number A, but a different atomic number, are called isobars.
Examples of isobars include : 2311Na and 2312Mg.
➢ The substances which disintegrate (or decay) by the spontaneous emission of radiations, are called the radioactive substances, e.g., uranium, radium, polonium, thorium, actinium, etc.
➢ Radioactivity is the process of spontaneous decay of unstable nuclei emitting a or b and g particles from the nucleus of atoms.
➢ Effect on atomic number (Z) and mass number (A) due to alpha, beta and gamma emissions :

➢ Properties of a-particles :
• a-particle consists of a helium nucleus. It is denoted by 2He4 (Atomic number 2 and mass number 4). It is a positively charged particle.
• It has least penetration power and highest ionization power.
• They can’t penetrate the skin but is harmful for to the human body.
• a-particles effect a photographic plate.
• a-particles cause fluorescence on striking a fluorescent material.
• These are affected by electric and magnetic fields.

➢ Properties of b-Particles :
• b-particles are highly energetic electrons, which are released from inside of a nucleus. It is denoted by –1b0 (Atomic number–1 and mass number 0) and +1b0.
• b-particles are negatively and positively charged, and it has negligible mass.
• For the emission of negative b-particle, a neutron changes into a proton and an electron, inside the nucleus and for +b particle a proton converts into neutron.
• b-particle has 100 times penetration power as compared to a-particle.
• It has less ionization power but is still harmful.
• b-particles effect a photographic plate.
• b-particles cause fluorescence on striking a fluorescent material.
• These are affected by electric and magnetic fields.

➢ Properties of g-Rays :
• The waves from the high frequency end of the electromagnetic spectrum which don’t have mass and moves with speed of light are called g-rays.
• It is neutral in nature and denoted by 0γo (Charge 0 and mass 0).
• It is 1000 times penetrating in nature and 100 times penetrating in nature as compared with a and b-particles respectively. It is very harmful to the living cell.
• These radiations affect a photographic plate.
• These radiations cause fluorescence when they strike a fluorescent material.
• These rays are not affected by electric and magnetic fields.

➢ Safety measures to be taken while using nuclear energy :
• While establishing a nuclear power plant : Nuclear plant must be a shield with lead and steel walls, housing it an airtight building with a back-up of a cooling system.

• While handling Radioisotopes : People handling radioisotopes should put on lead-lined aprons and gloves and handle the material with long lead tongs.

• In safe disposal of nuclear waste : Nuclear waste must be kept in thick casks and must be buried in specially constructed deep underground stores away from populated areas.

➢ Background radiations are the radioactive radiations which exist even in the absence of actual radioactive source. These are emitted both by internal and external sources.

We hope you liked Modern Physics ICSE Class 10 Physics Notes and solutions. If you have any questions please post them in the comments section below 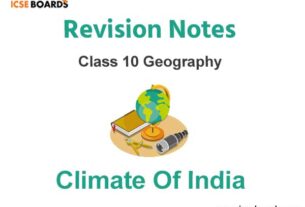 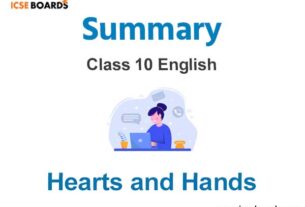 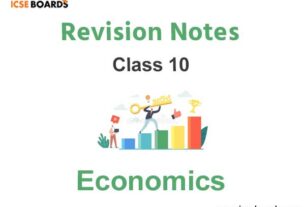