Question 2: Define:
(a) a chemical bond
(b) an electrovalent bond
(c) a covalent bond
Solution 2:
(a) A chemical bond can be described as the attraction between any two atoms in a molecule that keeps the molecule stable. Chemical bonds are formed due to the attraction of atoms.
(b) A chemical connection produced between two atoms by the transfer of one or more electrons from a metallic electropositive atom to a non-metallic electronegative atom.
(c) The chemical connection generated by the mutual sharing of electrons between non-metallic element atom pairs.

Question 3: What are the conditions for the formation of an electrovalent bond?
Solution 3:
(i) In order to form an ionic connection, the atom that becomes a cation must contain one, two, or three valency electrons. The other atom that forms an anion should have 5, 6, or 7 electrons in its valence shell.
(ii) A considerable difference in electronegativity between the two atoms is required to form an ionic connection.
(iii) Either a net loss of energy or energy liberation is required. The ionisation potential of one atom should be low, while the electron affinity of the other atom should be high.
(iv) An ionic compound is more likely to form if the lattice energy is high.

Question 5: Mention the basic tendency of an atom which makes it to combine with other atoms.
Solution 5:
By merging with other atoms, atoms create stable octet or noble gas configurations.

Question 8: An atom X has 2, 8, 7 electrons in its shell. It combines with Y having 1 electron in its outermost shell.
(a) What type of bond will be formed between X and Y?
(b) Write the formula of the compound formed.
Solution 8:
(a) Ionic connection will be formed between X and Y because X has seven electrons in its outermost shell whereas Y only has one electron. Y will lose that 1 electron and X will gain the electron lost by Y.
(b) The formula for the chemical would be XY.

Question 1: What are the conditions necessary for the formation of covalent molecules?
Solution 1:
(i) The outermost shells of both atoms, i.e. non-metals, should have four or more electrons.
(ii) Both atoms’ electronegativity should be high.
(iii) Both atoms should have a strong electron affinity and ionisation potential.
(iv) The electronegativity difference between the two atoms should be zero or very small.
(v) The atoms’ vicinity to one another should culminate in an energy reduction.

Question 3: Five atoms are labeled from A to E

Question 5: The element X has the electronic configuration 2, 8, 18, 8, 1. Without identifying x,
(a) predict the sigh and charge on a simple ion of X.
(b) write if X be an oxidizing agent or reducing agent and why.
Solution 5:
(a) X+
(b) X will be a strong reducing agent as it will have the tendency to donate its valence electron.

Question 6: What do you understand by polar covalent compounds? Explain it by taking hydrogen chloride as an example.
Solution 6:
Polar covalent compounds are generated when two non-metal atoms with distinct electro negativities share the same bound electron pair unequally. When a common pair of electrons is unequally distributed between two atoms, a covalent compound is said to be polar. The high electronegativity of the chlorine atom, for example, draws the shared electron pair towards itself in HCl. As a result, it acquires a minor negative charge, whereas the hydrogen atom acquires a minor positive charge. As a result, a polar covalent bond forms.

Question 7: Methane molecule is non-polar molecule. Explain.
Solution 7:
The atoms involved in the formation of a non-polar covalent connection between two similar or dissimilar atoms share the electrons equally. Methane has four solitary carbon-hydrogen covalent connections in its molecule. Because the electrons are equally shared by the carbon and hydrogen atoms, it is a non-polar covalent molecule. As a result, the shared pair resides between the atoms at an equal distance from both carbon and hydrogen atoms.

Question 9: (a) What do you understand redox reactions? Explain oxidation and reduction in terms of loss or gain of electrons.
(b) Divide the following redox reactions into oxidation and reduction half reactions.
(i) Zn + Pb2 → Zn2 + Pb
(ii) Zn + Cu2 → Zn2 + Cu
(iii) CI2 + 2Br → Br2 + 2CI-
(iv) Sn2 + 2Hg2 → Sn4 + Hg2+
(v) 2Cu + → Cu + Cu2+
(c) Potassium (at No .19) and chlorine (at No. 17) react to form a compound. Explain on the basis of electronic concept.
(i) oxidation
(ii) reduction
(iii) oxidizing agent
(iv) reducing agent
Solution 9:
(a) An oxidation-reduction reaction, or simply a redox reaction, occurs when oxidation and reduction occur at the same time.
The transfer of electrons between two chemical species is referred to as a redox reaction.
A reduction reaction is one in which an electron is gained, while an oxidation reaction is one in which an electron is lost.
The term “oxidised” refers to a chemical that has lost an electron, whereas “reduced” refers to a compound that has gained an electron.
(b)
(i) Oxidation :Zn → Zn 2+
Reduction : Pb2+ Pb
(ii) Oxidation : Zn → Zn 2+
Reduction : Cu2+ Cu
(iii) Oxidation : Br- → Br Reduction : Cl2 → 2Cl-
(iv) Oxidation : Sn2+ → Sn4+
Reduction : 2Hg2+ → Hg2
(v) Oxidation : Cu+ → Cu 2+
Reduction : Cu+ → Cu
(c)
(i)When potassium loses an electron, it oxidises and becomes a cation.
(ii) As chlorine obtains an electron, it undergoes reduction and creates the chloride anion.
(iii) Potassium is oxidised as a reducing agent.
(iv) Chlorine is an oxidising agent that causes it to be reduced.

Question 6: Potassium chloride is an electrovalent compound, while hydrogen chloride is a covalent compound. But, both conduct electricity in their aqueous solutions. Explain.
Solution 6:
In water, potassium chloride conducts electricity because the forces of attraction between positive and negative charged ions weaken, allowing the ions to move around.
The HCl bond, on the other hand, is a polar covalent molecule, meaning that H has a partial positive charge and Cl has a partial negative charge. As a result, it ionises in water, forming ions and conducting electricity.

Question 7: Name two compounds that are covalent when taken pure but produce ions when dissolved in water.
(a) For each compound mentioned above give the formulae of ions formed in aqueous solution.
Solution 7:
(a) HCl and H2O
(b) H+ and Cl- ions And
H+ and O2- ions

Question 9: Give electron dot diagram of the following:
(a) Magnesium chloride
(b) nitrogen
(c) methane
Solution 9:

Question : (a) Compound X consists of molecules.
Choose the letter corresponding to the correct answer from the options A, B, C and D given below:

(i) The type of bonding in X will be:
A. ionic
B. electrovalent
C. covalent
D. molecular

(b) Electrons are getting added to an element Y:
(i) is Y getting oxidized or reduced?
(ii) what charge will Y migrate to during the process of electrolysis?

(ii) Explain why carbon tetrachloride does not dissolve in water.

(iii) Elements Q and S react together to form an ionic compound. Under normal conditions, which physical state will the compound QS exist in?

(iv) Can Q and S, both be metals? Justify your answer.

Question : (a) Choose the correct answer from the choices A,B,C and D:

(i) The property which is characteristic of an electrovalent compound is that:
A. it is easily vaporized
B. it has a high melting point
C. it is a weak electrolyte,
D. it often exists as a liquid. 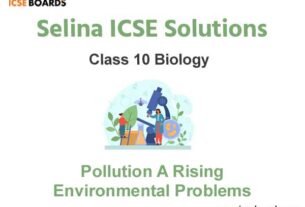