Question 1. What is circulatory system? Describe the circulatory system of humans.
Solution 1:
Circulatory System:- Human circulatory system also known as the blood vascular system consists of a muscular chamber heart, a network of close branches blood vessels and bloods the fluid which is circulated.
Circulatory system of human:-
Heart is divided into four Chambers two relatively small upper chamber called atria a, and two large lower chamber called ventricles.
1. The right atrium receives deoxygenated blood through coronary sinus and two large veins called venae cavae.
2. When the right atrium is filled with blood it contracts and pressure down the blood into right ventricle through the valve known as tricuspid Valve.
3. Then the right ventricle is filled with blood it contracts and pushes the blood into the pulmonary artery.
4. Pulmonary artery carries the blood to the lungs for oxygenation.
5. In lungs the blood become oxygenated and returns to the heart through the artery known as pulmonary artery.
6. Left atrium receive the oxygenated blood through the pulmonary artery.
7. When the left atrium filled with blood its contract and pushes the blood into the left ventricle through the valve known as bicuspid valve.
8. Then from the left atrium the blood is forced into the main artery known as aorta which circulates the oxygenated blood to all the parts of the body.

Question 2. Explain the following:
(i) Why is the SA node called the pace-maker of the heart?
(ii) Why is there no mixing of deoxygenated and oxygenated blood in the human heart normally?
(iii) Why is the closed circulatory system more efficient than the open system?
(iv) Why does the left ventricle possess a thicker wall than the right ventricle?
Solution 2:
1. The heart muscle cells have the ability to generate the electric impulse that triggers cardiac contraction the SAN initiates it simply because it generate the maximum number of action potential that is 70-75 per minute and is responsible for initiating and maintaining the rhythmic contractile activities of the heart therefore is it is called the pacemaker of the heart..
2. The human heart does not mix deoxygenated and oxygenated blood because of double circulation, in which blood passes twice through the heart and the right side is responsible for pumping deoxygenated blood while the left is responsible for pumping oxygenated blood.
3. An closed circulatory system the blood pumped by the heart is always circulated through a closed network of blood vessels the blood is always flows in the arteries and veins without mixing the system or pattern is considered to be more advances as the flow of fluid can be more precisely regulated.
4. The walls of the left atrium is thicker than the right atrium because the right atrium the blood pumped only to the lungs which is the shorter distance and less force is required but in left atrium it pump the blood to the whole body so it required more pressure which is the larger distance to travel.

Question 3. What are the differences between artery and vein?
Solution 3:

Question 5. What is the double circulation?
Solution 5:
The left and right atrium receives oxygenated and deoxygenated blood respectively which is passed on to the ventricles on the same side here there is no mixing of oxygenated and deoxygenated blood. Thus the ventricles pump it out without any mixing in two separate circulatory pathways are present in the organism and the black pass twice through the heart and this is known as double circulation.

Question 6. What are the materials carried by the blood?
Solution 6:
The material carried out by blood is, water, proteins, minerals, oxygen, carbon dioxide, Hormones, antibodies, waste products, organic material and digested material.

Question 8. Name the following:
(i) The soluble protein present in the blood plasma responsible for clotting.
(ii) The process by which leucocytes engulf and destroy bacteria.
(iii) The iron containing pigment in the erythrocytes.
(iv) The phase of the cardiac cycle in which auricle contracts.
(v) The study of blood vascular and lymphatic system.
(vi) The inflammation of pericardium.
(vii) The valve of right auriculo-ventricular aperture.
(viii) In embryological stage right and left auricles are communicated by.
(ix) Abnormal rise in RBC number.
(x) The first heart sound.

Question 10. Refer to fig 7.3 and answer the following question:

(ii) Which chamber of the heart has the thickest wall?
(a) Right atrium
(b) Left atrium
(c) Left ventricle
(d) Right ventricle

(iv) Both erythrocytes and leucocytes form in the:
(a) bone marrow
(b) thymus
(c) tonsil
(d) lymph node

(x) Which of the following engulfs pathogen rapidly?
(a) Acidophils
(b) Basophils
(c) Monocytes
(d) Neutrophils

(xiv) The E.C.G. is used to detect
(a) heart attack
(b) heart block
(c) coronary thrombosis
(d) all the above 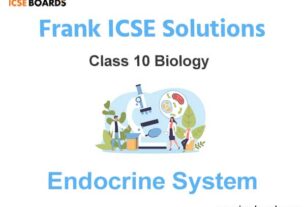