Qualification –
1) Citizen of India
2) Completed 35 years of age
3) Qualified for the election as a member of L.S.
4) Must not held any office of profit under the Government of India or under any State Government. or any Local or other Authority under the control of said Government.

Election –
1) Indirectly elected through Electoral College consisting of elected members of both the Houses of Parliament and elected member of the Legislative Assemblies of the States including National Capital Territory of Delhi and the Union Territory of Puducherry.
2) Nominated members of either House of Parliament and State Assemblies are not a part of Electoral College.
3) Election of President is in accordance with the system of Proportional representation by single transferable vote and the voting is by secret ballot.

Term –
1) Holds office for a term of 5 years
2) There is no upper limit on the number of times a person can become president.

Oath of office –
President takes an oath in the presence of Chief Justice of India, or in his absence, senior most judge of the Supreme Court.

Vacating the office –
1) Submit his resignation to the Vice President who will then communicate it to the speaker of the Lok Sabha.
2) President may, for the violation of the constitution, be removed from the office by impeachment.

1) Financial –
(i) A money bill can be introduced in the Parliament only with the President’s recommendation.
(ii) President lays the Annual Financial Statement i.e. the Union budget before the Parliament.
(iii) Can make advances from the Contingency Fund of India to meet unforeseen expenses.
(iv) Appoints a Finance Commission after every 5 years to recommend the distribution of taxes between the Centre and the states.

2) Emergency –
President may proclaim a state of emergency in the whole or a part of India if he realizes that a grave situation has arisen in which the security of India might get threatened by war or external aggression or rebellion. President can declare three types of emergencies.
(i) National Emergency or External Emergency:
He can declare National Emergency on the grounds of war, external aggression or armed rebellion in the country. Duration [Every proclamation of Emergency must be approved by both Houses of Parliament within 1 month by a majority of the total membership of the House and a majority of not less than 2/3rd of the members present and voting] It cannot remain in operation for more than 6 months.
(ii) Breakdown of Constitutional Machinery:
If the President, can receive a report from the Governor] is satisfied that the governance of State cannot be carried on in accordance with the provisions of the constitution, he may declare an emergency. This is called Presidents rule as the president assumes all the functions of the Government. of the State. Duration- such an emergency lasts for 2 months.
(iii) Financial Emergency:
If the president is satisfied that a financial stability or credit of the nation is threatened; he can declare a Financial Emergency. Duration- Such a proclamation has to be laid before both Houses of Parliament and is valid for 2 months.

3) Executive –
All executive orders are issued in the name of the President.
(i) Appointment of State officials:
He appoints:
a) PM and the Council of Ministers on the PM’s advice.
b) Chief Justice and the judges of the Supreme Court and the High Courts.
c) Governors of the States.
d) Lt. Governors and the Chief commissioners of the U.T.S
e) Attorney General of India.
f) Comptroller and Auditor General of India.
g) Chairman and the Union Public Service Commissioners [UPSC]
h) Chairman and members of the Planning Commission.
i) Chairman and members of the Economic Commission.
(ii) Control over State Government’s during Presidents Rule.
(iii) Control over UT’s and Border – The administration of the UT’s and the Border Areas is the responsibility of the President.

4) Legislative Powers –
(i) Addresses Sessions of Parliament:
The President addresses both Houses of Parliament for the first session after each General Election to the Lok Sabha and the Commencement of the first session of each year.
(ii) Dissolve the Lok Sabha:
Can dissolve Lok Sabha and order fresh elections. [Rajya Sabha i.e. a permanent body, hence not subject to dissolution]
(iii) Nomination of Members:
Nominates 12 members to Rajya Sabha amongst person having special knowledge or experience in- literature, science, art and social services. Many nominate 2 members of the Anglo-Indian community to the Lok Sabha if he feels that the community is not adequately represented in the House.
(iv) Assent to Bills:
No Bill can become a law without the Assent and signature of the President, H may give his assent or withhold the Bill or send it back to the House concerned with recommendations.
(v) Summon or Prorogue the Houses:
He has the power to summon and prorogue the Houses. The power to summon parliament is subject to the conditions that there should not be a gap or more than 6 months between 2 sessions of each House.
(vi) Assent to some State Bills:
The Governor may reserve some bills passed by the State Legislature for the consideration of the President Bills affecting matters such as the Powers of High Court are reserved for the consideration of the President. He can refuse his assent or can send it back for reconsideration.
(vii) Issuing Ordinances:
He can promulgate on ordinance which has the same status as an act of Parliament. He may withdraw the ordinance anytime. The Power to promulgate ordinances is subject to following conditions.
a) The President must be satisfied that circumstances are necessary for him to take immediate action.
b) An ordinance can be promulgated when both Houses are not in session. However, if one House is in session, there is no bar in issuing ordinances.
c) If the parliament does not approve the ordinance, it lapses. If the ordinance is not disapproved within 6 weeks, from the date the parliament reassembles it will cease to operate.
d) Ordinance lapses if it is replaced by an Act of Parliament.

5) Discretionary Powers –
(i) Appoints PM in a situation when no party commands the clear support of the majority of the Lok Sabha Members.
(ii) Appoints PM in case of sudden death of the incumbent.
(iii) When the ruling party loses majority support in the Lok Sabha or when the vote of no confidence is passed against it, recommends the President to dissolve the Lok Sabha, then it is at the direction of the president to either dissolve the House or ask another party to prove its majority.
(iv) The President can dismiss the Ministers in case the Council of Ministers losses the confidence of the House but refuses to resign.

6) Judicial Powers –
(i) No criminal proceedings can be initiated against the Presidents order during his term in office.
(ii) He appoints the Chief Justice of the Union Judiciary and other judges on the advice of the Chief Justice.
(iii) He has the power to grant pardons, reprieve or remission of punishment or commute death sentence.
(iv) He is not answerable before any court of law for the insistence of power and duties of his office.

Why is President elected indirectly?
1) The real executive power is exercised by the council of Ministers headed by P.M. the President is merely the titular head of the Government and does not exercise any real power. Hence instead of direct election and not giving him real authority, he is elected by an electoral college.
2) Mass election is not possible due to vast population.

Election –
Electoral college consisting of members of both Houses of parliament elects the V.P.
1) Election is held in accordance with the system of proportional representation by a single transferable vote and the voting is done by secret ballot.
2) Nomination papers should be proposed by at least 20 electors [M.P.s.] and other 20 electors should second the same.

Oath of Office –
Takes an oath before the president [ some other persons appointed on his behalf by him]
Term of office –
1) V.P. shall hold an office for 5 years from the date on which he enters the office.
2) May resign from his office by writing a letter of resignation addressed to the president, which would be communication by the president to the speaker of the Lok Sabha-
3) He may be removed from his office for violation of the constitution.
4) Continues to hold his office till his successor inters his office.

• Union Government, State Government -2 types of authority in a federal setup in India.
1) UAF – All citizens of the age [18] have the right to vote and elect their representatives.
2) The Governor is the executive Head of the State.

Hope you liked The Union Executive The President and The Vice President Class 10 ICSE notes, in case you have any questions please put comments in the box below 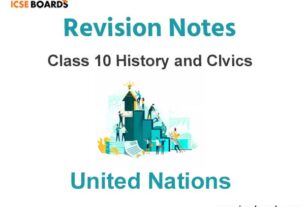