Students should refer to the summary provided below for Daffodils, this is an important chapter in ICSE Class 10 English book. You can refer to all Treasure Trove Poem Summary provided on our website. These have been prepared based on the latest books and syllabus issued by ICSE.

The Poem:
The poem is a word picture of daffodils at Ullswater seen by the poet in 1802, while he along with his sister Dorothy visited Glencoyne Park. It is this visit that inspired the poet to write this famous poem. It is a lyrical poem written by this nature poet and a leading romantic poet. For him, there is nothing which is superior to nature. He himself loved nature and was captivated by it.

The Poet:
William Wordsworth, an early leader of Romanticism in English poetry, is one of the greatest lyric poets in English literature. He was born on April 7, 1770 at Cockermouth. At the age of thirteen, he lost his parents. His love for nature developed in his childhood. In 1802, he married his childhood friend Mary Hutchinson. In 1843, be became Britain’s Poet Laureate. He died on April 23, 1850. One of his most important works, published in collaboration with S.T. Coleridge is the Lyrical Ballads. Some of his other major works are: Solitary Reaper to The Cuckoo, Lucy Poems and Intimations of Immortality. Prelude, considered to be his masterpiece, was published after his death in 1850.

The Poem in Detail:
Stanza-1:
The poet says that he was wandering alone as a cloud wanders over hills and valleys. While roaming, he saw a crowd of daffodils beside the lake and it seemed they were dancing with the movement of soft breeze.

Stanza–2:
The poet describes how beautiful they looked. He compares them with the continuous movement of stars that shine and twinkle in the night. There were thousands of daffodils stretching along the margin of a bay. It seemed as if they were moving their heads in a lively dance.

Stanza-3:
The waves of the bay were dancing but the daffodils superseded them happily. He feels that a poet is bound to be happy in their happiness. He went on staring at them and could but image what a wealth the scene had brought to him.

Stanza – 4:
The scene had no impressed and captivated him that even when he lay on his bed, they danced before his inward eye. The poet feels that the beautiful scene filled with the joy of daffodils is the bliss of solitude.

Literary Devices:
i. Lyric:
This poem is a lyric. Lyric is derived from the word lyre. It means the poem is meant to be sung to the accompaniment of the lyre. Lyrics have been written on nature, happiness, love, grief and loss.

ii. Rhyme:
The poem is composed of four stanzas. The rhyming pattern followed here is that the first line rhymes with the third, and the second with fourth and the fifth with sixth.

iii. Imagery:
Wordsworth has presented a natural scenery which is calm and yet full of joy. He has used a series of images of lakes, fields, trees, stars and clouds. Use of colors associated with the objects of nature is there. It begins with pessimism ‘lonely as a cloud’ and ends with optimism ‘dances with the daffodils’.

iv. Alliteration:
For Example:
Beside the lake, beneath the trees.
v. Personification:
Ten thousand saw I at a glance
Tossing their heads in sprightly dance
Here the poet imagines the daffodils tossing and dancing like human beings.
vi. Simile:
The poet compares himself to a cloud.
“I wandered lonely as a cloud”.
vii. Hyperbole:
For the sake of emphasis ideas are exaggerated and that is hyperbole. For example:
“Ten thousand saw I at a glance”
Word-meaning:
• Wandered – walked slowly. Float – to move slowly on water or in the air. Vale – valley. Fluttering – moving with quick light movements.
• Tossing – moving suddenly one’s head upwards.t did – surpassed. Jocund – cheerful.
• Glee – a strong feeling of happiness.
• Gazed – looked steadily at someone or something. Oft – often.
• Pensive – quiet or thoughtful. Bliss – complete happiness.

ASSIGNMENTS
(1) Read the extract given below and answer the questions that follow:
I wandered lonely as a cloud
That floats on high over Vales and Hills,
When all at once I saw a crowd,
A host of golden Daffodils;
Beside the Lake, beneath the trees,
Fluttering and dancing in the breeze.

3. Which figure of speech is used in the following lines:
When all at once I saw crowd
A host of golden daffodils
A3. The figure of speech personification is used here. Daffodils are described as human beings.

(2) Read the extract given below and answer the questions that follow:
Continuous as the stars that shine
And twinkle in the milky way.
They stretch’d in never-ending line
Along the margin of a bay
Ten thousand saw I at a glance
Tossing their heads in sprightly dance.

2. What is the milky way? Why is it referred to in the extract?
A2. A milky way is a cluster of stars which shine brightly across a huge stretch of space. Similarly, like the stars in the milky way, the poet feels that the daffodils are like the shining milky way and their brilliance and illumination makes the poet refer them to milky way.

5. What were the daffodils doing? Which figure of speech is used here?
A5. The daffodils were dancing merrily in the breeze. The poet is using personification here when he describes the movement of the daffodils in breeze as if they are human beings.

(3) Read the extract given below and answer the questions that follow:
The waves beside them danced but they,
Out-did the sparkling waves in glee,
A poet could not but be gay,
In such a jocund company!
I gazed – and gazed – but little thought
What wealth the show to me had brought.

4. What is the mood of the poet in the above extract? Which lines tell you so? Why is he in such a mood?
A4. The poet is amazed at the enchanting quality of daffodils. He is in a mood of extreme joy seeing the beauty of nature which has brought extreme joy to him. The lines that express his mood are:
“A poet could not but be gay
In such a jocund company”
He is in such mood because the beauty and amazing quality of daffodils has filled his heart with joy and amazement.

5. With reference to the above extract, state why Wordsworth can be called a nature poet?
A5. The poet loved nature with all his heart. All the phases of nature impressed him, specifically the beauty of nature and the joy that it gave and the joy that nature seemed to feel itself. This oneness with nature is the reason why he can be called a nature poet in the real sense of the word. The above extract is the proof of Wordsworth’s outlook on nature.

(4) Read the extract given below and answer the questions that follow:
For oft when on my couch I lie
In vacant or in pensive mood
They flash upon that inward eye
Which is the bliss of solitude
And then my heart with pleasure fills
And dances with the daffodils

4. What does he mean by the ‘inward eye’?
A4. For the poet, the inward eye is the eye of his imagination, his soul, which can bring out the images of daffodils even in their absence. 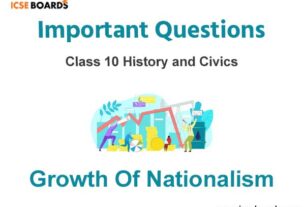 Growth of Nationalism ICSE Class 10 Board Exam Questions And Answers