Students should refer to Pollution A Rising Environmental Problem ICSE Class 10 Biology Board Exam Questions provided below with solutions. These will help the students to understand the type of questions which have been asked in previous year examinations and the type of solutions which the student should give to get good marks. You should also refer to ICSE Class 10 Biology Sample papers for more practice

Question. Mention whether the following statements are true (T) or false (F)

(1) Pollution and pollutant are one and the same thing.

(2) Brick kilns give out both gaseous and particulate pollutants.

(4) Kitchen garbage and leftovers in food dishes can be used for making manure (compost).

(5) The chief gaseous air pollutants are CO2 and SO2.

(6) Diseases like cholera and jaundice are examples of soil pollution.

(7) Use of unleaded petrol and Compressed Natural Gas (CNG) in automobiles is one of the methods of abatement of gaseous and particulate air pollution.

(8) Erosion of ancient monuments and statues is caused by acid rain which itself is the result of gaseous pollution.

(9) CO2 and methane are directly contributing to global warming.

Question. Fill in the blanks :

(i) Rubber particles and dust raised by running motor vehicles are examples of ………………… pollutants.

(ii) Too frequent exposure to ………………… in a medical diagnostic technique may damage chromosomes.

(iii) Too much gaseous exhausts containing CO2 and SO2.
Ans. Bronchitis, Asthama

(iv) Prolonged noise such as the one produced by crackers throughout night.
Ans. • It interferes in communication.
• It interrupts concentration of thought and disturbs peace of mind.
• It lowers efficiency of work.
• It disturbs sleep and leads to nervous irritability.
• A sudden loud sound can damage ear drum. Prolonged noise can even lead to deafness.
• Bird life gets disturbed by aircrafts landing or taking off from airports.

Question. Give two examples of gaseous air pollutants.
Ans. (i) SO2, (ii) CO2

Question. Name any two small scale industries that can be the source of particulate air pollution.
Ans. (i) Brick kilns,
(ii) Textile industries.

Question. Multiple Choice Type (Select the most appropriate option in each case):

(1) Which one the following is an example of pollutant ?
(a) A rat entering your kitchen.
(b) CO2 given out by the respiring organisms.
(c) The heat given out while cooking food.
(d) The dust raised during road-cleaning

(2) Which one of the following is a “dirty” practice contributing to pollution and seriously needs stoppage by educating the public ?
(a) Too loud marriage musical bands
(b) Disposing of corpses in rivers
(c) Floating lighted earthen lamps (“deeyas”) in rivers
(d) Wearing scented/perfumed clothes

(i) A pollutant which is mainly responsible for causing acid rain
Ans. Sulphur dioxide

Question. Mention any two measures to minimise noise pollution.
Ans. • Prohibiting blowing of horns.
• Restriction on loud speakers, specially during night.
• Planting trees by the road side and keeping doors closed in the houses reduce noise reaching our ears.
• Not to burn fire crackers.

Question. What are the common sources of oil spills, and how do they affect sea life?
Ans. The sources of spills are the overturned oil tankers, offshore oil mining, oil refineries. Oil pollution kills a lot of marine life (fish, birds, etc.)

Question. Who launched Swachh Bharat Abhiyan ? Give objectives of the campaign.
Ans. The Swachh Bharat Abhiyan is a significant cleanliness campaign started by the Government of India. It was officially launched on 2nd October 2014 by our Prime Minister Shri Narendra Modi, who took the cleanliness pledge at India Gate in Delhi. He wanted to fulfil Mahatma Gandhi’s dream of a clean and hygienic India.
Following are some objectives of the campaign :
(i) to clean the streets, roads and infrastructure of the country’s cities and towns. (ii) to eliminate open defecation through the construction of individual, cluster and community toilets. The goal is to make an Open Defecation Free (ODF) India by 2nd October 2019, i.e., on Mahatma Gandhi’s 150th birth anniversary, by constructing 12 million toilets in rural India at a projected cost of ` 1.96 lakh crores.
(iii) to establish an accountable mechanism of monitoring latrine use.
(iv) to achieve efficient solid and liquid waste management systems.

Ans. 1. Oil spills and thermal pollution can lead to dying of fishes on a large scale. Oil spills are the accidental discharges of petroleum in oceans or estuaries. The sources of spills are the overturned tankers, offshore oil mining, oil refineries, etc. Thermal pollution is mainly caused by power plants and industrial units that use water as a coolant.
2. (i) Noise pollution
(ii) Major sources of noise are the industrial machines, workshops, trains, automobiles on the streets, jet aircrafts, landing and taking off in the air,
loudspeakers and musical bands in public places, etc.
(iii) Harmful effects –
(a) Disturbs sleep and leads to nervous irritability.
(b) Interrupts concentration of thought and disturbs peace of mind 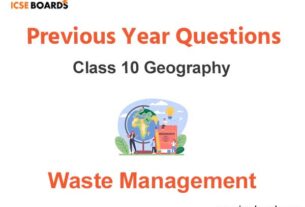