The short story ‘The Umbrella Man’ is written by Roald Dahl. Here the main character is a master trickster who robs umbrellas from pubs worth 20 pounds just for a single pound. To loan money, he shows his genuine concern for the person he aims to trick. He says that he has forgotten his wallet while he goes out for a walk. He asks for a pound to a person for his taxi fare and in return he gives an umbrella. With that pound, he will buy a bottle of neat whiskey. The Umbrella Man tricks a twelve-year-old girl and her thirty-four year old mother. They are the three main characters in this story.

Summary of The Umbrella Man

From the viewpoint of the twelve year old girl, the story has been told. The child is honest, extroverted, perky and full of humour. In the story the mother claims to be the better judge but actually the girl is the better judge throughout . The mother is soon to be a teenager and is very strict but still allows her daughter to have ice creams after dental appointments.  She has a cold hearted personality. . She desires for material comforts, which she does not have, like a car with a chauffeur. She believes the nicer a strange man seems to be, the more suspicious a woman should be of his intentions. She is stuck-up but ready for an adventure which is evident when she and her daughter scurry after the old umbrella man to see what he was up to. Roald Dahl, as usual, gives wonderful descriptions of his characters that remain with you long after the story is done. The person who is described the most is the Umbrella Man. He is a marvelous actor and ready to do anything to get his tumbler of neat whiskey. He is clever enough to not go to the same pub twice for a drink so that he wouldn’t be caught stealing the umbrellas. There are many humorous scenes in the story which add color and fun  to the otherwise simple ‘twist in the tale’ story of ‘The Umbrella Man’.

In the story ,the mother and daughter mistakenly thought  that the Umbrella Man had spent more in gifting his silk umbrella to them just by  taking a pound. They were fooled  by this thought only for a while until they saw him flick an umbrella after collecting his hat and coat. The Umbrella Man kind of  comes off as a cool character, a real fraud, but  good at heart who likes to help others indirectly by at least giving them an umbrella in exchange for their pound note. His funny nature makes us smile from inside. He he goes flitting from one pub to another for a tumbler of neat whiskey which he doesn’t even get any change in return

The story is simple and fun to read. It is written in a simple language so that the readers are able to understand very easily.

The Old Man at The Bridge Summary ICSE Class 10 English 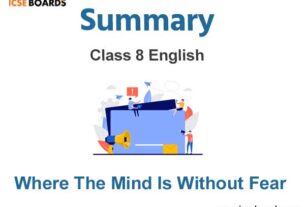 Where The Mind Is Without Fear Chapter Summary Class 8 English 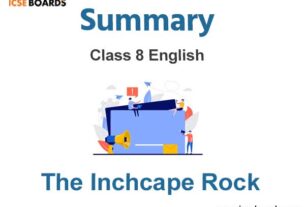