Question 2. Is the following statement true (T) or false (F)?

1) Maize grain is fruit and not a seed.

2) Seeds fell in a flower-bed from the previous crop usually do not germinate until the next sowing season.

3) Oxygen is necessary for the germination of seeds.

4) Some seeds have no cotyledons at all.

2) A chemical used in experiments which absorbs oxygen.

3) Part of the plumule above the embryonic axis of the seed.

4) A plant that shows viviparous germination.

5) The layer of the endosperm of maize rich in protein.

6) A seed with folded plumule leaves.

4) Seeds absorb water through __________ which also helps in the diffusion of respiratory gases.

Q5) Arrange the following set of a term in order, so as to be in a logical sequence. Rewrite the correct order.

Question 1. What is the difference between an embryo and a seed?
Solution.
A seed is a mature ovule after fertilization. It contains a tiny living-plant called the embryo. The embryo within the seed remains in an inactive or dormant state, until it is exposed to favorable conditions, when it germinates.

Question 1. What is the function of the following in a seed?
a) Seed coat
b) Micropyle
c) Cotyledons
d) Radicle
e) Plumule
Solution.
(a) Seed coat: It protects the seed’s fragile interior sections from damage as well as germs, fungus, and insects.
(b) Micropyle: Micropyle permits water to enter the seed through its pore during germination.
(c) Cotyledons: They have nourishment for the embryo in them.
(d) Radicle: It will become the future root.
(e) Plumule: It helps to shape the upcoming shot.

Question 2. Suggest an experiment to prove that a suitable temperature is necessary for germination.
Solution.
The goal is to show that germination requires a specific temperature.
Apparatus: Refrigerator, two beakers, damp cotton wool
Label two beakers with the letters A and B.
In each beaker, place few gram seeds on wet cotton wool.
Refrigerate beaker B and keep beaker A at room temperature.
The seeds in beaker A germinate in 1-2 days, demonstrating the need of a sufficient temperature for germination. Beaker B seeds may not exhibit symptoms of germination or may germinate after many days, although not to the same extent as beaker A seeds.
Inference: Seeds must germinate at a specific temperature.

Question 3. Sometimes the potatoes kept in a basket during the late rainy season start giving out small shoots. Would you call it germination? Give reasons in support of your answer.
Solution.
Yes, we call it germination because it encompasses all of the events that contribute to the creation of a seedling. Either the epicotyl or the hypocotyl lengthens during germination.

Question 5. Justify the statement that the maize grain is a ‘one-seeded fruit’.
Solution.
The ovarian wall creates the fruit wall and encloses the seed in a fruit, which is an expanded ripening ovary. The seed is protected by the fruit, which also aids in seed dissemination.
Because the fruit wall and seed coat are united to create a protective shell, the maize grain is known as a “one-seeded fruit.” Grain is the name for such a fruit.

(a) The ‘micropyle’ has two vital functions:
• It allows the embryo to absorb water and make it ready for germination.
• Allows for the absorption of breathing gases into the developing embryo
(b) The seedling develops from the embryo of the seed.
(c) The seed’s cotyledons offer sustenance to the developing seedling or embryo.
(d) Embryonic structure 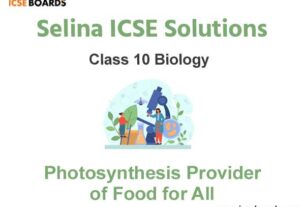